Today is World Animal Day and I want to tell you about one of the largest animal welfare projects in Europe, the Libearty Sanctuary Zarnesti. On a rainy day in Transylvania I ventured off to the sanctuary in hopes of meeting some European brown bears. During the hour-long bus ride to the sanctuary from nearby Brasov, I kept wondering if we’d actually see any bears. Are bears weary of rain? Would they be off seeking shelter and warmth within the habitat of 69 acres of oak forest in the Carpathian Mountains? I had convinced myself I’d be quite lucky if we were able to see even one of the majestic creatures. I soon found that not only were the bears fearless in the rain, they seemed to love it! The much-needed rain must have been quite refreshing after a historically hot summer. I lost count of just how many bears we saw during the feeding time when there were easily more bears than people in sight. I can confidently guarantee that you’ll encounter many bears when you visit the sanctuary, regardless of the weather.

Zarnesti has been providing a safe, natural environment for previously captive bears since 2005. Over the past decade, nearly 100 bears have been rescued by the organization. Prior to being brought to the sanctuary, these animals had been confined to tiny cages where they suffered constant abuse and neglect. When the bears arrive at the sanctuary they are often malnourished and in a dire state of health. The people who enslave them typically don’t seek any kind of veterinary care. In Romania, it was typical to see a caged bear outside of restaurants and gas stations. While imprisoned by private owners and circuses, some of the bears had been forced to perform tricks that are unnatural for a bear, such as dancing, riding bicycles and posing with tourists for photos. Most of the bears were captured as cubs, they had never climbed a tree or gathered their own food. Some of the bears were even terrified by other bears when they first arrived at the sanctuary. Their natural instincts were completely eliminated. They were fully dependent on their human owners. 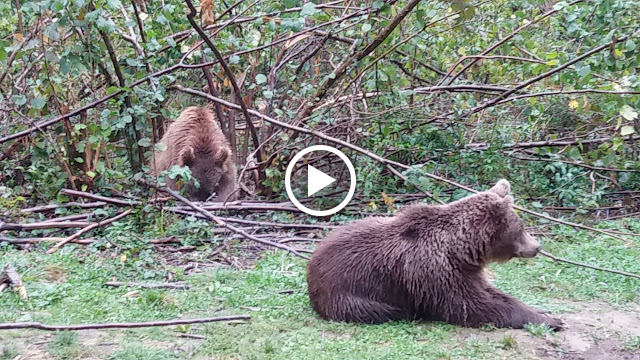 All of this was occurring even though the European brown bear is a protected species under The Convention on the Conservation of European Wildlife and Natural Habitats. In 2005, ownership of wild bears became officially illegal in Romania. Yet not all of the fury inhabitants in the Sanctuary are from Romania. Afterall, Libearty is the largest Sanctuary of brown bears in the world.  There are Maria and Marko, who were brought from Albania, Misha, who came from Georgia and Betsy who was rescued from Texas, USA. The sanctuary is the only one of its kind in Romania and is ran by the NGO AMP. There are bear sanctuaries in Greece, Hungary, Turkey, Germany, Thailand, Pakistan, India and China. Each of these sanctuaries enables authorities to rescue illegally held bears and provide centers of shelter and protection where they can live out their lives in their natural environments. There are currently 80 rescued bears who are now living in their natural forest habitat at Libearty. It takes two tons of food per day to feed them! These bears are finally free to climb trees, swim in pools of water and are fed a natural balanced diet for the first time in their lives.

It broke my heart to learn about the numerous cubs that had been orphaned when their mothers were killed by hunters. Most of these cubs typically can be rehabilitated and released back into the wild.  Unfortunately, this was not the case for dynamic sister duo Gina and Sofia, whose mother was likely murdered by hunters. Prior to their rescue, the sweet lady cubs were a tourist attraction at a mini zoo in Bancu. They were lovingly named after Gina Lollobrigida and Sophia Loren by the famous French actor Pierre Brice, who visited the sanctuary and fell in love with the pair. Today, they love to climb tall trees together and sit on the branches to look over the other bears.

We also met Max, a Romanian brown bear who was captured as a cub and held captive in the town of Sinania, near the Peleş Castle. He lived in a tiny cage where tourists would pay to pose for a photograph by him. The constant flashes made Max lose his sight permanently. After nearly 20 years of torture Max, at last, found liberty when authorities brought him to the sanctuary. His sight wasn’t the only thing his evil captures had robbed him of, his canine teeth and claws had been cut off, pepper spray was administered into his nose and he was tranquilized daily with drugs dissolved in beer. Max now lives in a lush enclosure that has a pool with fresh spring-water and a cozy den. Within this nurturing environment, he has learned how to use his other senses to survive. Each of the bears at Libearty has stories that will shed light on animal cruelty caused by humans.